Heavy snow and blizzard conditions continue to create difficult to impossible travel across the north and central Plains and Upper Midwest. The front will also shift into the East with multiple hazards. Wintry mix moves over parts of the Mid-Atlantic with areas of significant icing possible. Heavy snow will spread over the Northeast. Severe storms will be possible in the Southeast. 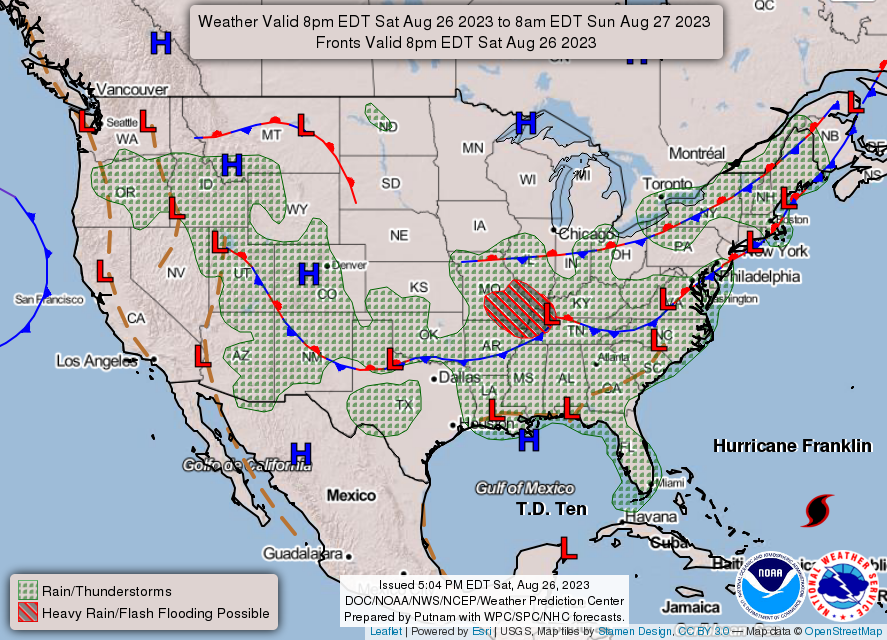 Massive Storm To Impact The Central and Southern U.S.

A massive storm system will impact the Central and Southern U.S. over the next few days. Widespread heavy snow with blizzard conditions and a zone of wintry mix is possible from the north-central High Plains to the Upper Midwest. Meanwhile, in the warm sector of the storm, a severe weather event with all hazards is possible in the southern Plains and Lower Mississippi Valley to Florida.

A dangerous storm surge is expected along portions of the east-central and northeastern coast of Florida, portions of coastal Georgia, and the Florida Big Bend along the Gulf coast.  The storm surge will be accompanied by large and damaging waves along the Atlantic coast. Hurricane conditions are expected across portions of the coast of southeast and east-central Florida beginning this evening or tonight, where a Hurricane Warning is in effect.  Tropical storm conditions have begun along the east coast of Florida in warning areas and will spread northward to Georgia and South Carolina later today.  Tropical storm conditions are expected to begin along the west coast of Florida within the warning area this evening or tonight.

A dangerous storm surge is expected along much of the east coast of Florida, portions of coastal Georgia and the Florida Big Bend along the Gulf coast.  The storm surge will be accompanied by large and damaging waves along the Atlantic coast.

Nicole A Threat To Florida And The Southeast

The National Hurricane Center continues to monitor Nicole, which is expected to approach the east coast of Florida late Wednesday. Hazards including, dangerous storm surge, tropical storm and hurricane conditions and heavy rain and flooding are expected to impact parts of Florida and the Southeast.

Hurricane Ian to Bring Considerable Impacts to the Southeast

Hurricane Ian is expected to make landfall today in the Southeast. Life-threatening storm surge and rip currents, heavy rain and flash flooding, tornadoes, and hurricane-force winds can be expected along the South Carolina coast and into North Carolina. Ian made landfall on mainland Florida as a category 4 major hurricane near 4:30 PM ET south of Punta Gorda near Pirate Harbor. Catastrophic storm surge inundation along with destructive waves is ongoing along the southwest Florida coastline. Hurricane-force winds are expected to spread inland to central Florida near the core of Ian through early Thursday. Heavy rainfall will continue flooding.

Major Hurricane Ian will approach the west coast of Florida into Wednesday. Life-threatening storm surge is likely with the highest risk from Naples to Sarasota. Devastating wind damage is expected near the core of Ian. Considerable flooding is expected with widespread, prolonged moderate to major river flooding expected across central Florida. Tornadoes are possible in central and south Florida.

Hurricane Ian will bring a life-threatening storm surge along much of the Florida west coast where a Storm Surge Warning has been issued, with the highest risk from Fort Myers to the Tampa Bay region. Hurricane-force winds are expected in west-central Florida beginning Wednesday morning. Heavy rainfall may cause flash, urban, and small stream flooding over Florida this week.

All Eyes on Hurricane Ian

Odyssey is monitoring Ian, which became a hurricane early this morning in the western Caribbean Sea and may become a major hurricane tonight near western Cuba. Regardless of Ian’s track and intensity over the next several days, life-threatening storm surge, hurricane-force winds, heavy rain, flooding and tornadoes are just some of the potential impacts we will see this week.

Ian Forecast to be a Major Hurricane Entering the Gulf of Mexico; Threats to Florida

The National Weather Service states there is a risk that Ian will bring dangerous storm surge, hurricane-force winds, and heavy rainfall along the west coast of Florida and the Florida Panhandle by the middle of this week. Flash and urban flooding is possible with rainfall across the Florida Keys and the Florida peninsula through the middle of the week. Residents in Florida should ensure they have their hurricane plan in place.